The methodology used under Module 2 – Social Skills was mainly based on using theatrical skills as a way to convey how communication takes place as part of the wider context of social skills, through an experiential approach, mainly through the session “Expression through emotions”. The aim of using theatrical skills and an almost informal educational approach was to help the participants get out of their comfort zone and express themselves while simultaneously ensuring that the environment was comfortable and welcoming. For the implementation of the session plan “Expression through emotions”, the women had to say a specific sentence using different emotions, to conclude that how we say things matters a lot. It was somewhat challenging since the women did not grasp the concept of the activity very quickly, but as we proceeded with it, it became clearer. The results were also at times funny, but in a genuine and not disrespectful way.

Another methodology that worked very well under this Module was the provision of practical examples to ensure that the participants have grasped and understood well certain key aspects. For instance, during the session “Appropriate behaviour in conflict situations”, with the help of a handout, participants were presented with concrete examples of reacting to and approaching conflict situations and how NOT to approach them. A discussion was prompted for each example and participants also shared with the rest of the team some personal experiences from conflict situations and how they dealt with the effectively or ineffectively, and what they have learned during their expetiences. 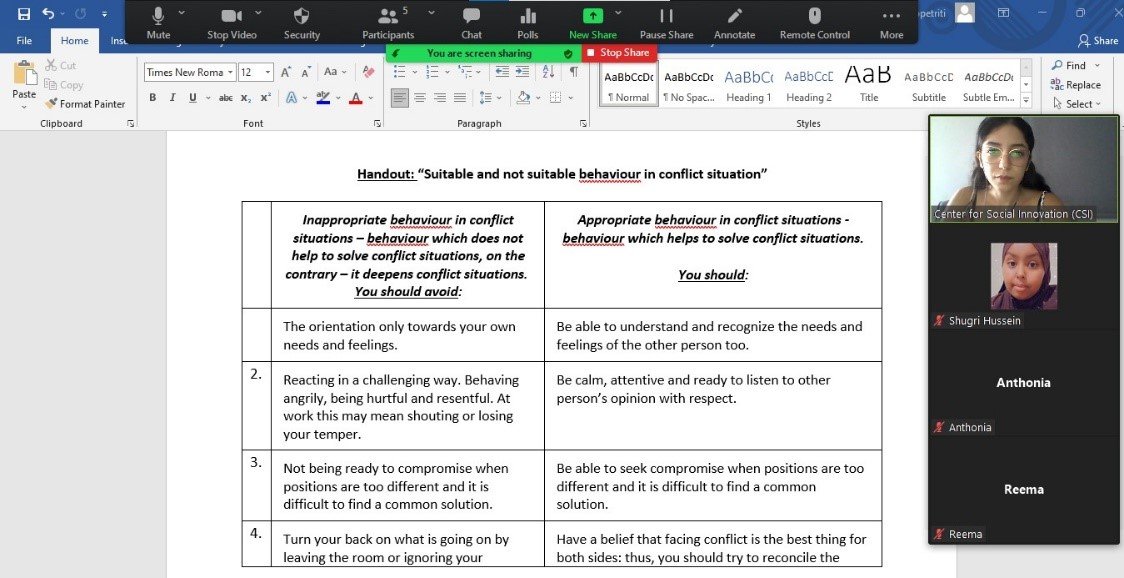 Feedback from participant(s) or trainer:

What’s the most important thing you have learned during the workshop?

Perhaps one of the greatest things that as a trainer I have learned from this experience is that even if sometimes the participants might come out as shy and embarrassed, afraid to make their voice heard, it is important to provide a safe space for them to feel comfortable to get outside of their comfort zone and learn. Of course, this could not be done in the first few online sessions where the participants are still largely unfamiliar with the trainer and the others; it should be done after a few sessions and after the trainer is absolutely certain that it will not cause any awkward feelings to the participants.